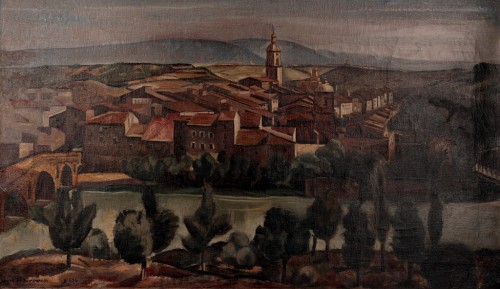 Henry de Waroquier [1881-1970] was born in Paris. He took part in a series of lectures held by Ch. Genuys in Collège Rollin and École des Arts Décoratifs, however he did not undertake a formal study at the Academy of Fine Arts. As a self taught painter he drew his inspirations from local galleries situated at the rue Laffitte,  such as: Vollard, Durand-Ruel and Bing. There, he could observe and admire art of Impressionism and East Asia. But it was Seurat and Cézanne that made the greatest impression on Waroquier.

The painter was also an avid traveler. Between 1901 and 1910 he stayed in Brittany. Around that time he also visited Switzerland and Italy where he returned almost every year. Between 1914 and 1921 he went to Corsica, Chamonix, St. Tropez, Brittany, Spain and in 1933 to France and Belgium. Since 1906 he was  showing his artworks at the Salon of Independent Artists, Autumn Salon and Tuileries Salon. He was also included in several group artshows held at The Barbazanges (1817), Druet (1921), British Museum in London (1930), The Galleria Internazionale d’Arte Moderna in Rome, The Art Institution in Chicago, also in Helsinki, Philadelphia, and Tokyo.

Despite that he rejected a strict classification of his own art, his original and highly recognisable style of painting corresponded with the art of Italian primitives, Cezanne's works, and finally his stays in Spain and contact with the untouched nature.