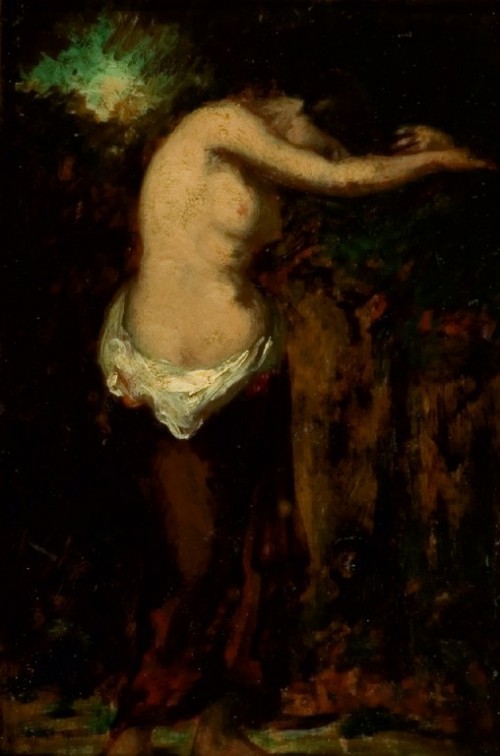 Narcisse Diaz de la Pena - french painter with spanish nationality. His lastname Diaz de la Pena can be translated as "days of suffer", which was reffered to his early life. Diaz de la Pena became an orphan at the age of 10 and later on he was attacked by an adder, which followed amputation of his leg. Despite his nonscholar education he was succesful in artistic world. Inspired by Antonio da Correggio and Eugene Delacroix, he copied masters in Louvre and started creating small, romantic canvases. Before his career as a painter he was working in Arsane'a Gillet's manufacture based in Paris, where he met Jules Dupre. It was Jules who took him to Fountaineblau where he met Theodore Russeau and other members of Barbizon School. This group made a great impression on him and consequently he became lanscape painter. Spanish attitude and french upbringing are seen in his dynamic scenes, various colour palette and poetic spirit. Diaz de la Pena specialised in views of dark forests contrasted with bright skies. His ouvre concists of paintings which are mysterious, efemeral and luminous. The artist works are part of the most important world collections for example Louvre, The Wallace Collection in Hertford House as well as National Gallery and Victoria and Albert Museum.