The Girl in a Park 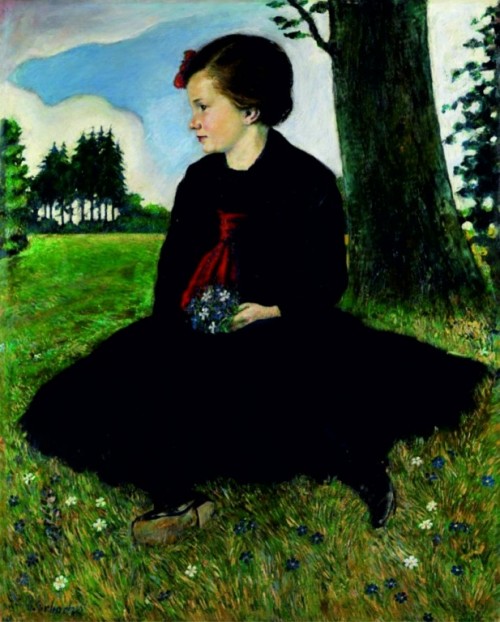 Alois ERBACH (1888 Wiesbaden - 1972 Wiesbaden) was a German painter, engraver and illustrator.
At the beginning he worked as an inspector at the Land Registration Office, treating painting and drawing as a hobby. In 1911 he started studying at the Academy of Fine Arts in Munich, under Heinrich Knirr. The artist had been focusing mainly on a landscape painting and portraits. In 1912 he displayed his artworks at the atelier of Franz Josef Brakl, an art dealer, generally considered as the discoverer of Franz Marc.

Between 1915-18, during the First World War, he was performing a military service. After studies he lived and worked as an independent artist in his family town of Wiesbaden. In 1927 he moved to Berlin, where he rented an atelier at Kurfürstendamm. At that time he worked as an illustrator and a graphic designer for satirical magazines and critical press, such as:  "Die Pleite", "Knüppel", "Eulenspiegel" or "Rote Fahne". As a social activist Erbach took part in the “Society of the German Revolutionary Artists” exhibition in 1931 and in “Revolutionary Art” display held in Berlin, in 1932.

His early works were explicitly influenced by German expressionism, while later he was inspired by the New Objectivity and surrealism. During the nationalist dictatorship Erbach moved to Majorca and after the World War II he came back to Wiesbaden where he worked until death.