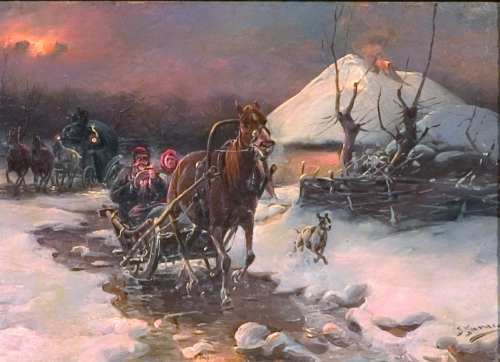 J. Konarski is an artistic pseudonym. According to Hans Peter Buhler the works signed 'J. Konarski' were in fact executed by Alfred Wierusz-Kowalski, one of the most prominent representatives of the Munich School of Painting. Recently, some researchers indicate similarity between the works of Franciszek Bujakiewicz and those of J. Konarski and are prone to think that Bujakiewicz and Konarski were the same person.

Genre scenes of J. Konarski typically represent leisures of Polish nobles in the 19th century nostalgic landscape of Polish countryside. They share certain traits typical for Munich School of Painting, i.e. the choice of subject: hunting scenes, sleigh rides etc., realistic manner of execution, and selection of colours: dim shades of violet, brown, grey with touches of rouge and orange. It is said that the scenes are bathed in so called 'Munich sauce'.