Donkey, sheep and goat in the pasture 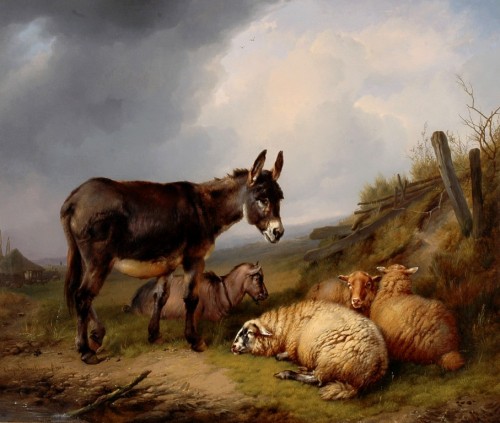 Eugene Joseph VERBOECKHOVEN
[1798/99 Warneton- 1881 Brussels]
Verbooeckhoven was an animal painter from the family of strong artistic roots. His father Barthélemy Verboeckhoven (1759-1840) was a sculptor, and his younger brother Louis Charles (1802-1889) was a marine painter.

Verboeckhoven studied in Ghent on the Academy of Fine Arts, under supervision of landscape and animal painter Balthasar Paul Ommegack (1759-1840). He traveled a lot around Europe, he visited France, Great Britain, Italy and Germany.

He lived in Brussels, where in 1827 he opened his own workshop. He painted mostly landscapes with animals. His master’s paintings, as well as works by Paulus Potter and Aelbert Cuyp were the inspiration for Verboeckhoven’s art works, which can be characterized as rich in details with carefully depicted perspective and so called academic fini.

Already during his career in Brusseles, Verboeckhoven became highly popular and very succescul, also financially. He was a member of several academies, for example in Amsterdam, Antwerp and Sankt Petersburg.

Verboeckhoven’s works can be found in various museums all around the world including Musée du Louvre, Rijksmuseum in Amsterdam, The Wallace Collection in London, Metropolitan Museum in New York and The State Hermitage Museum.