A Town Beyond the Forest 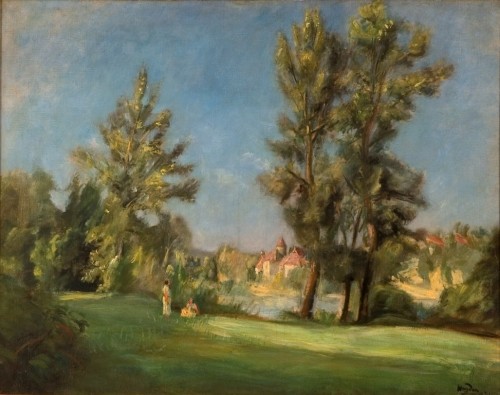 Henri Hayden was born in Jewish family of catholic confession. After abandoning Technical University he started studying in Varsaw Acadaemy of Fine Arts. In 1970 he moved to Paris to continue studying in Academie "La Palette". He was attending an outdoor painting in Brittany and was also inspired by Władysław Strzemiński, Cezanne and Cubists paintings. With the latter group he became familiar in 1915 when he moved his atelier to Montparnasse. At that time he met Picasso, Jacob, Matisse, Severini and Metzinger. Hayden exhibited repeatedly in Salons: Autumn, Independent, Tuileries and May. His works of art were presented in prestigous parisian galleries: Druet (1911), Rosenberg (1919), Zborowski (1923), Suillerot (1953,1957,1965) and others.

Literature
Dictionary of Polish and foreign artists creating in Poland.