A Cottage by the Waterpool 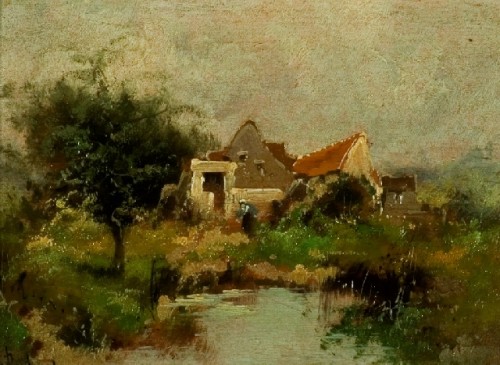 A Parisian by birth, is mostly famous for recording the everyday life of Paris in times of Belle Epoch. Early orphaned by his father, he left school to find employment at the notary office. Between 1870 and 1871 he was enlisted to the army to fight in  Franco-Prussian War. Next, he worked as an illustrator for French Railway. That was the time when he created his first landscapes of French province. In 1876 he first exhibited his painting, Flower market along the Seine, in snow in the Museum in Reims. The following year, he made his debut at the Salon, displaying cityscapes of Paris and  provicial landscapes. Since then, Eugene regularly appeared at the Salons. After 1900 his works were also exhibited in Dijon, Orléans, Versailles, Roubaix, Saint Etienne, Bordeaux, Monte Carlo, and Hautecoeur.

Eugene Galien-Laloue had left large collection of Parisian cityscapes and landscapes of French province. Most often he painted gouaches and used oil-paint. The artist worked under various pseudonyms such as J. Lievin, E.Galiany and L. Dupuy. Frequently, he was leaving Paris to paint landscapes of Normandy and environs of Barbizon, settling in for short time in Barbizon. His countryside views, filled with warm, bright colours, were often painted in spring and summer months. They show idyllic, unruffled image of French village. Paris in contrast, was depicted in autumn and wintry aura. Galien represented busy life of Parisian streets, minutely depicting architectural details. His paintings are exhibited in Museum in La Rochelle, Quai Voltaire in Paris, and Museum in Louviers.