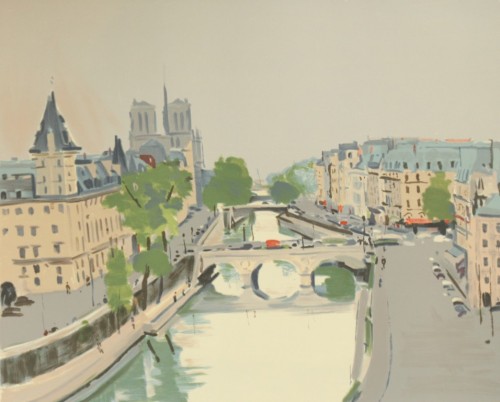 Constant Le Breton was born on 11th March 1895 in the family of watercolor painters at Loire St. Germain des Pres, a small village in Anjou. He started a painter carreer as a terminator in decorative art undertaking, first in Nantes, then in Le Mans. He started education in Ecole Arts Decoratifs in Paris, but he was too poor to continue studying. He was appointed to the Army in 1915. After the war he moved to Paris and started working as a book ilustrator and woodcraftor. He was scholarshiper of Blumenthal foundation and he started to have good reputation as a landscape painter. Le Breton was a friend of many artists, also older than him, like Luce, Derain, Segnozac, and some of his generation like Belmondo and Brayer. Le Breton was also famous as a portrait painter. He painted for example Charles Dullin, Ingrid Bergmann and Beatrice Bretty. many of his works is in Parisian museums, his portraits are in collections in France, USA, Switzerland, Germany, Greece and UK. Le Breton was died February 1985 in Paris.