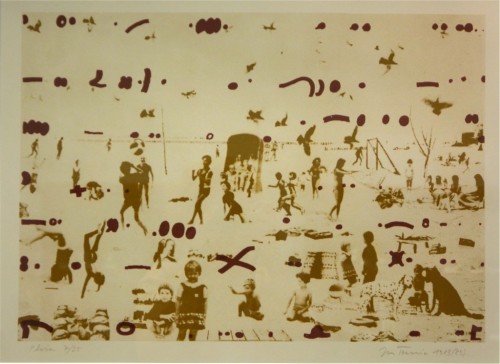 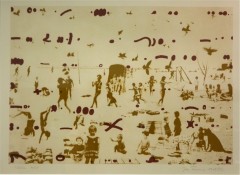 Jan Tarasin was a painter, graphic designer and art theoretic. In the 1946 - 1951 he studied at the Academy of Fine Arts in Cracow and trained in ateliers of painters: Zygmunt Rudnicki, Zbigniew Pronaszko and Wacław Taranczewski and graphic designers: Andrzej Jurkiewicz and Konrad Strzednicki. During his second year at the Academy he was talented enough to attend 1st Modern Art Exibition in Poland.

In 1952 Tarasin became recognizable thanks to his "BUMELANT" poster and litography "Race to the Peace" - both works represented social themes. He habitually atended more and more exhibitions. In 1962 Jan achieved a scolarship to China and Vietnam and at the same time in Galerie Lambert in Paris and Pinkegalerij in Gissenburgu in Netherlands took place his solo exhibitions. One of the works showed in Paris was chosen to participate in II Intertnational Exhibition of Young European and Japan Artists in 1964, where he also was rewarded. During 1963 - 1967 Jan Tarasin was a lecturer in the Interior Design Department at the Academy of Fine Arts, where he had graduated earlier. Beacuse of his nature admiration he took various travels to Netherlands, France and Sweden.
In 1967 he moved to Varsaw where once more he became lecturer at the Painting Department in local Academy. For the first time he also started publishing his essays, drawings, graphics and fotographs in "Zeszyty" - magazine related with Art History. In 1987 he was nominated rector of this Academy, where he worked until his retirement in 1996.
For Tarasin art was the way of discovering the rules of the world we live in. Because of that he explored Far East philosophy and modern science fo instance. His oeuvre characterise constantly and rapidly changing signes and symbols which represtens changing nature and relation between chaos and order.
Since 1962 Tarasin was a member of Cracow Group - one of the most important artistic gatherings in Poland.  In 1976 he was rewarded the Cyprian Kamil Norwid Critic Reward and in 1984 Jan Cybis Reward. In 1989 he also achieved title of the Honourable Kalisz Citizen. In 2005 Polish Minister of Culture decorated him the "Gloria Artis Golden Medal" for his cultural achievement. His works of art are a part of the most important museum collections in the world.