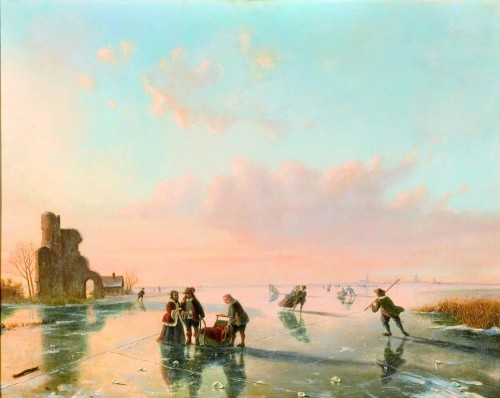 A Dutch landscapist. Roosenboom was both the student and at the same time the son-in-law of Andreas Schelfhout (1787-1870), who appreciated his talent for painting the favoured theme of games on ice. Later, the artist tutored Fredrik Marinus Kruseman (1816-1882). Most often he worked in the Netherlands, namely The Hague, Rotterdam, Amsterdam, Haarlem, and Assen. He also travelled extensively around Germany, England, Scotland, and Belgium. In 1846 Roosenboom was appointed director of the School of Drawing „Kunst zij ons Doel” in Haarlem. His oeuvre includes the easily recognizable scenes with skaters, and surprisingly summery riverscapes, as well as views of seasides. His paintings can be found in the Museum Boijmans Van Beuningen in Rotterdam, the Frans Hals Museum in Haarlem, and the Rijksprentenkabinet in the Rijksmuseum in Amsterdam.