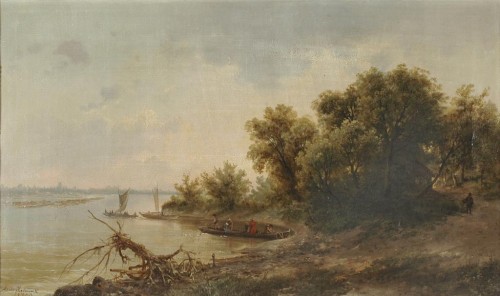 Adam MALINOWSKI [1829-1892] began his artistic studies in Lublin, where he specialized in set design. In 1851 he was accepted by Warsaw Theatre Directorate decoration studio and worked under Antoni Sachetti and Józef Hilary Głowacki. Since 1864 he worked in Vienna as a decorator of imperial theaters, and in 1873 he had been promoted for the main decorator of the Warsaw Theatre Directorate: Grand Theater [Teatr Wielki], Variety Theatre [Teatr Rozmaitości] and Summer Theatre [Teatr Letni]. Malinowski specialized in an easel painting, especially in landscapes, rarely had he created genre scenes and portraits. He was taking part in many art exhibitions, organized usually by the Zachęta National Gallery of Art in Warsaw (where since 1863 he displayed about 90 pictures) he also showed his artwork in the Krywult Salon and in the Friends of the Fine Arts Society [Towarzystwo Przyjaciół Sztuk Pięknych] in Cracow.