A Bridge on a River 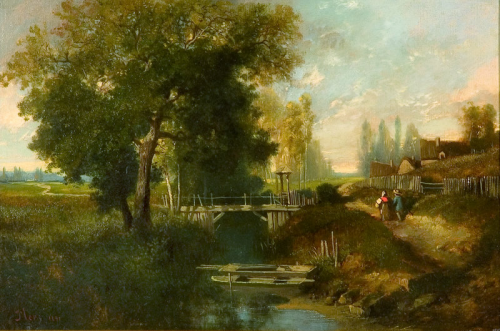 Camille Flers came from a renowned, Parisian family. His father was a  director of a porcelain manufacture. Flers began his artistic education in a studio of Demarey, a pastel painter. He grew very fond of this technique. He spent some time working in his father's manufacture where convinced by Pierre Ciceri (1782-1871) the artist undertook painting theatrical sceneries. Next, he was an apprentice of a famous landscape painter, Joseph François Paris (1784-1871). In 1820 Flers trvelled to South America, taking up many jobs on the way there. When he finally returned to Paris, he worked as a porcelain painter once again. In 1831 he made his debut at the Salon. Since then, he exhibited his paintings regularly, obtainging a medal in 1847, and a honorary distinction in 1849. Environs of Normandy and forests of Fontainebleau were his source of inspiration for pastel painting. He was one of the forerunners of the Barbizon School due to his style of working. He initiated paintings in nature, preparing sketches in open air and finishing them in the studio. Flers died in 1868. His paintings are exhibited in the Louvre in Paris, among others.